Sun has been working at re-architecting the TCP/IP stack in Solaris for Virtualization for close to 3 years, making progress each year with new features. OpenSolaris 2009.06 exhibits some of the most recent enhancements
http://link.brightcove.com/services/player/bcpid1640183659?bctid=24579687001

Network infrastructure in Solaris has been re-written at the NIC, Driver, and Socket levels - all the way up the stack.

http://www.opensolaris.com/use/ProjectCrossbow.pdf
"Crossbow is designed as a fully parallelized network stack structure. If you think of a physical network link as a road, then Crossbow allows dividing that road into multiple lanes. Each lane represents a flow of packets, and the flows are architected to be independent of each other — no common queues, no common threads, no common locks, no common counters." 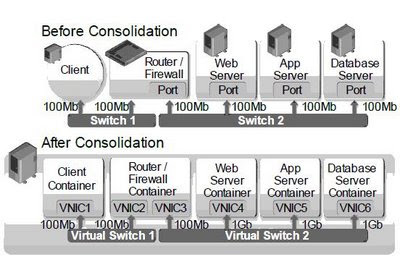 Some of the more interesting results of this integration: create networks with no physical NIC cards; create switches in software; assign bandwidth to a virtual NIC card (vNIC); assign CPU resources to a vNIC; assign quality of service (QoS) attributes to a vNIC; throttling protocols on a vNIC; virtualize dumb NIC's via the kernel to look like smart NIC's; switch automatically between interrupt and polled modes.

The implications are staggering:
Usually, adding & leveraging features like QoS and Virtualization will decrease performance to an operating system, but with OpenSolaris, adding these feature with a substantial re-write of code, enabled a substantial increase in read & write throughput over Solaris as well as substantial increase in read throughput (with close to on-par write throughput) in comparison to Linux on the same hardware.
http://www.opensolaris.com/learn/features/networking/networkperformance/

This OpenSolaris technology is truly ground-breaking for the industry.

While the UDP packets are sent/received, they can be dropped under times of high utilization (event storms, denial of service attacks, managed network outages, etc.) - so applying higher quality of service to these protocols becomes desirable to ensure the network management tools have the most accurate view of the state of the network.

Communication to internal system, which are aggregating that data, require this data for longer term usage (i.e. monthly reporting) and must be maintained (i.e. backups) - but these subsystems are no where near as important to maintaining an accurate state of the managed network when debugging an outage, which affects the bottom line of the company. These packets can be delayed a few microseconds to ensure the critical packets are being processed.

Enhanced performance in the overall TCP/IP stack also means more devices can be managed by the network management platform while maintaining the same hardware.

The H-A platform can be loaded up with OpenSolaris 2009.06 and the LDOM holding the Network Management application can be live-migrated seamlessly in minutes.
http://blogs.sun.com/weber/entry/logical_domain_mobility_between_solaris

Sun has announced OpenSolaris 2009.06 as well as third-party news related organizations like The Register.

It is nice to see more features getting bundled into OpenSolaris!

OpenSolaris offered robust kernel and file system integrated CIFS for some time (something that no other operating system has done as well, besides Windows) - a beautiful thing for integrating Solaris, Linux, and Windows environments onto a single underlying file system.

Since OpenSolaris is the core infrastructure which the Sun Storage platforms are based upon, adding faster networking and processor enhancements (both CPU throughput as well as power efficiency) provides performance boosts for Sun integrated storage systems.

In the area of integrated storage systems, being able to release OpenSolaris under UltraSPARC T1/T2/T2+ means being able to leverage octal crypto engines for both encrypted network transfers of storage data as well as encrypted disk reads/writes for storage data. Additional performance on encryption from client to disk would give a great boost in performance to the storage line. If Sun decided that this would be of interest to the U.S. DoD. - an UltraSPARC T OpenStorage product would be sensible.

Seeing the inclusion of SPARC RocK code seems to indicate that the next generation silicon is moving forward, otherwise programmers would not have wasted their time including code for a processor that would not be released (to undergo another set of silicon revisions.)

Also, seeing OpenSolaris boot under SPARC is a good indication that Solaris 11 is right around the corner, since OpenSolaris is basically the Solaris 11 release. The GUI install integration of OpenSolaris for SPARC is tantalizing - this would possibly make Solaris 11 one release-away.

The only other thing the market would want, on a future wish-list, is full clustering integrated into ZFS (with Sun's acquisition of HPC clustered file system, it is just a matter of time.) One would hope the market will not have to wait until Solaris 12 to run a zpool command sequence to configure a clustered ZFS file system! :-(

What does this have to do with Network Management?

With wide-spread network management, the need for massive storage systems to hold historical data of ever larger networks drive the need for substantial and redundant storage. Technologies lke ZFS enables this.

With Sun historically targeting the Telecommunications Industry, it is good to see this focus has not deviated as Sun has reached out to Storage (purchase of StorageTek, Open Storage initiative, etc.) - rather it is good to see the convergence of the silos as it benefits all communities.
Posted by David at 4:59 PM No comments: