Abstract:In the area of network, there are 3 major modes of communication: satellite, tower, and wired infrastructure. The first two require finite shared resources referred to as spectrum. The final requires expensive infrastructure to be dug into the ground or strung along poles. In order for companies to compete effectively in a nation's network, infrstructure must be built or acquired. The process of acquiring or merging of assets with smaller network players is always going on, but this latest battle has been somewhat interesting.

Background:
Clearwire, an early 4G U.S. network provider, is in talks to be acquired by two different domestic companies: Sprint (wireless provider) and Dish Networks (satellite provider.) Foreign SoftBank is interested in buying Sprint, at the same time, adding tremendous uncertainty to the mix.
﻿
﻿The Time Line: In October 2012, Japanese SoftBank tried to acquire the third largest U.S. network provider: Sprint. In December 2012, Sprint bought for itself a little Christmas present - Clearwire: a 4G network service provider. In January 2013, Dish made an unsolicited bid to purchase Clearwire, even though Sprint was in process of buying it. In March 2013, foreign SoftBank tries to aleviate security concerns in the U.S. by indicating Chinese equipment maker Huawei will be ejected from the network. In April 2013, domestic Dish offers to purchase Sprint to build a combined satellite and tower based wireless infrastructure. In May 2013, SoftBank agrees to U.S. government veto power over board of director appointments. Also in May 2013, Sprint increases their bid for Clearwire, to get their wireless spectrum.


What They Want & Need:
SoftBank owns about 1/3rd of Chinese electronic commerce company Alibabba, and wants a foothold in the U.S. market but has regulatory issues to overcome. (SoftBank uses primarily Chinese equipment.) Sprint needs to upgrade to 4G networking and find additional sources of revenue. Clear has wireless spectrum, but their gamble on early 4G WiMAX has not turned out to be the standard once hoped for, and needs to upgrade it's 4G network. Intel Corporation used to be a WiMAX advocate, Clearwire uses Huawei equipment. SoftBank uses the same cell phone wireless spectrum that Clearwire owns, making the purchase of Sprint (who is purchasing Clearwire) a very good investment - one phone, one infrastructure, multiple nations. Intel, a SoftBank partner, is pushing for SoftBank's acquisition of Sprint (and Clearwire) - possibly because of new promised equipment sales. Dish needs to expand it's market from Satellite television, provide content through wireless towers to cell phones, and add voice to their television service.

Abstract:
The movement from physical to virtual servers has been happening for decades. First, the use of Physical Domains under SPARC "big-iron" became possible when Sun purchased Cray SPARC assets in 1996 while SGI purchased the remaining. The Sun Enterprise 10000 was introduced in 1997 with Physical Domains. With the release of Solaris 10 almost a decade ago, physical systems could be moved to logical Zones under a single kernel in 2004. With the line of T processors, the ability to load multiple OS's on the same platform at the firmware layer became possible in 2006. This article discusses LDom's. 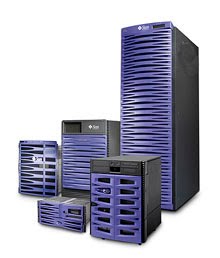 P2V:
Physical to Virtual Migration or P2V is possible to consolidate physical Solaris platforms onto various virtualized Solaris platform destinations - such as Zones, Branded Zones, or LDom's. The P2V process uses an archive called a FLAR. 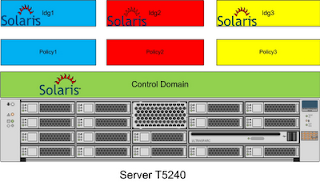 Logical Domains:
The documentation describing the deployment of the Logical Domains for Oracle Enterprise Manager is available under Oracle's web site. Each Logical Domain, sits on top of the firmware of T-Class processors, and can host Solaris 11, Solaris 10, and Solaris 10 can host older Solaris 8 & 9 Operating System under Branded Zones.

Network Management Implications:
Network Management platforms can very easily be consolidated onto newer platforms, with very little effort, using free drag-and-drop tools such as Oracle Enterprise Manager. If a network management center is still running under multiple older Physical platforms, one should consider Zones or LDom's, which offer virtually no overhead (in comparison to systems such as VMWare or HyperV which require a foreign software layer between their domains and the hardware, introducing problematic latency under heavy loads.)
Posted by David at 6:50 PM No comments: