Fujitsu is best described by their own hand:

The development of Fujitsu SPARC64 processors began in the early 1990s. The first generation SPARC64 ran at just 118MHz, and 20 years later SPARC64 is now approaching 4GHz; more than 30x improvement in the clock frequency alone. Fujitsu continues to enhance the technical capabilities and performance of processors in Fujitsu mainframe computers, supercomputers, and UNIX servers."

SPARC had been topping the charts in overall CPU performance, for years. Besides fastest raw clock rates, with the fastest threads, fastest CPU cores, fastest CPU sockets, fastest encryption, fastest decryption... capabilities also include native Oracle RDBMS Number capabilities as well as query accelerators in silicon, and security in silicon where software is restricted from snooping outside their memory areas (which Intel and other processors had been experiencing security patch slow-downs in order to deal with malware.) 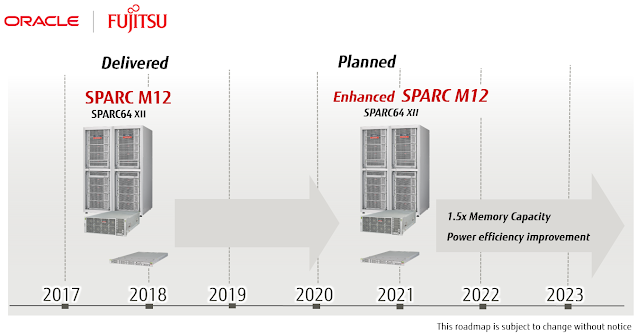 Today, the SPARC64 M12 is one of the fastest processors on the planet, and was surpassed briefly only by the Oracle SPARC M8 processor, which arrived shortly afterwards. On-tap is what this author is describing as the SPARC64 M12+, for 2021.

The M12 maxed out at 3TB or RAM in the 2 processor chassis, while the next generation should be 1.5x larger - this author is hoping for a 4TB memory footprint in a 2x CPU chassis. Previous chassis supported Solaris 10, Solaris 11 should be supported at the minimum. This author is expecting a Solaris 11.5 release.