Whatever manufacturer AMD will choose, with its heterogeneous systems architecture (HSA), it's facing interesting new challenges. The signs indicating that Sony intents to switch to x86 processors and AMD GPUs for its next Playstation generation (2013/2014) are mounting. That Cell is not an option for Sony anymore already became largely clear when Cell partner IBM pulled out. With AMD's HSA concept, Sony could even fit the chip with its own extensions (FPGAs, media processors, DSPs and so on). And also Microsoft is supposed to be highly interested in an extended cooperation with AMD, for its next Xbox generation.

August of 2011, IBM unplugged POWER on their high-end Super Computer.


The Power 755 was supposed to be at the heart of the petaflops-busting "Blue Waters" super at the University of Illinois, but IBM pulled the plug on that deal last August.

POWER 7+ is more than 6 months late, with the press being virtually silent about it. It seems the high-end, mid-range, low-end, desktop, and embedded gaming consoles are all experiencing POWER problems with IBM.

There has been much discussion from Oracle, regarding the ceasing of Itanium application development. It seems Larry Ellison was really "The Oracle" he projected to be - Itanuim may officially be dead in 2016. (new link)


Oracle's fraud counter-claim against Hewlett-Packard was dismissed by a Californian Superior Court, but during the proceedings it became clear that the Itanium line really doesn't have much of a future anymore. About two years after the eight-core chip Poulson, scheduled for this year, rolls out, the Kittson is supposed to follow, and we might still see the minimally improved Kittson+. Then, around 2016, the Itanium line will finally be ceased.

It seems, with how big of an issue Itanium discontinuance rumors were, that there would be more press regarding the now confirmed death of Itanium. 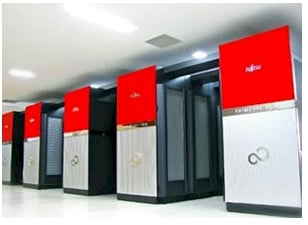 As other RISC and VLIW vendors are finding themselves on sinking ships, Fujitsu releases another generation of SPARC CPU for their #1 performing supercomputer platforms.


Fujitsu has fired up the first installation of its PrimeHPC FX10 massively parallel Sparc-based supercomputer, a machine called Oakleaf-FX that weighs in at 1.13 petaflops of peak raw performance... For the PrimeHPC FX10 machines, Fujitsu has etched a new 16-core Sparc64-IXfx processor that runs at 1.85GHz

SPARC under Fujitsu doubles down and lives on - with a very occasional article about about the vendor who creates the fastest supercomputer in the world. 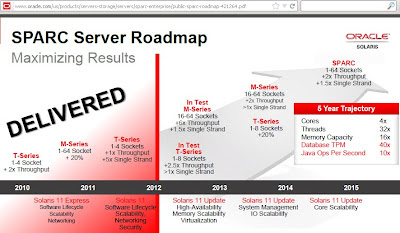 When Oracle adjusted the SPARC roadmap - another M-Series with 6x the throughput was noted. The 16-64 socket platform has virtually no one in the industry speculating, which baffles this author.


Too bad we'll probably never see those chips in an Oracle Server.

This writer is not exactly sure where an M-Series with 6x throughput will come from (in the next 6 months), unless it comes from Fujitsu's Super Computer investment. It seems pretty clear that the processor has to come from Fujitsu.

The March 2012 edition of Oracle Magazine had an image of the SPARC T5 processor, slated to be released later this year. With a doubling of the cores per socket and a doubling of the sockets per chassis - this should be a very nice addition to the SPARC family.

Oracle Magazine provided a comforting photo of another next-generation open architecture SPARC chip (SPARC is an open specification designed & manufactured by multiple vendors), as single-vendor proprietary CPU's from IBM (POWER) and Intel (Itanium) continue to demonstrate their decline.
Posted by David at 12:30 PM